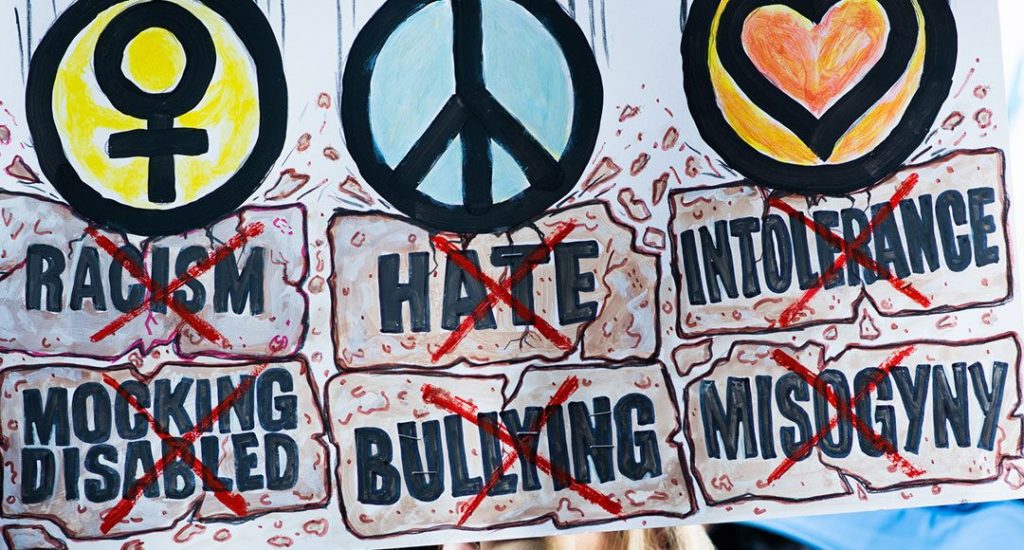 Hate speech, online and offline, is as a moral as a political issue. It, indeed, questions the limit between freedom of speech and crime, between the possibility to say whatever you want and the negative effects this will have on people around you. Sure, it is not just a our days problem and actually in Europe it has been one of the most important issues, from an historical point of view. However, with the spread of the internet and social networks, hate speech found new places where to be carried out, sometimes with frequency and with the advantage of anonymity. What several institutions are trying to do  is regulating the online world, to make a safer place out of it. As for fake news, the EU is trying to find agreements with platforms to counter online hate speech.

COE Recommendation 97 defines hate speech as all forms of expression which spread, incite, promote or justify racial hatred, xenophobia, antisemitism or other forms of hatred based on intolerance.

As regard cyberbullying, there is not an agreement at a EU Countries, about the definition. EU institutions describe it as the “repeated verbal or psychological harassment carried out by an individual or group against others”. The Commission defines it as different from face-to-face bullying in various aspects, such as the anonymity, the capacity to reach a wider audience, the lack of sense of responsibility of perpetrators and the reluctance of victims to report incidents. It calls for urgent responses by relevant public and private actors.

According to a 2016 Eurobarometer survey, 75 % of people who follow or participate in online debates had witnessed or experienced abuse, threat or hate speech.

According to a 2018 Eurobarometer survey, instead, “hate speech is the type of illegal content most mentioned by respondents in 10 countries (in particular Malta, Czech Republic, Bulgaria and Poland). While Estonia, Italy and Lithuania are the only countries where fewer than one in five say to have come across hate speech online”. While surveying, it was not given a definition of “hate speech”, leaving it to the free interpretation of respondants.

Eurostat, in the document “Being young in Europe today – digital world” shows concerns about the behaviors of children and young people. According to the report,  they may be exposed to potentially harmful content, which may create dependency, anxiety or aggression”.

What is the EU doing?

Hate speech, online and offline, is a crime under the EU law. Anyway, legislation cannot ignore or violate freedom of expression and information and must avoid the criminalization of unpopular or offensive viewpoints. However, in the single EU countries, laws and interpretations vary.

As a response to the problem, considering the role of online platform, in last years the European Commission started a dialogue with them, to counter online hate speech. It is also funding projects going in this direction.

In May 2016 the Commission and 4 platforms (Facebook, Youtube, Twitter and Microsoft) announced a Code of Conduct on hate speech, that other companies joined too. One of the goals of the code is that “hate speech contents” should be removed in 24 hours, in order to reach the least audience possible.  Even if legislative measures haven’t been proposed, in March 2018 the European Commission recommended operations to increase the efforts.

What could the EU do?

Do you have any idea or proposal to improve this situation or to increase the already done efforts? If so, you still have some days to apply for our project in Spain, where you will have the possibility to discuss about Media and Web manipulation. You will be given the opportunity to write a proposal and, maybe, discuss it with MEPs in Brussels.